Lost in Blue 2 is a survival game developed by Matrix Software and published by Konami for Nintendo DS in 2007. It is the sequel to Lost in Blue. The game is followed by Lost in Blue 3.

The story begins after you choose to play as either Jack or Amy. There is a cut scene where the ship begins to fill with water. The player has the option to choose an item from the table, closet, or suitcase. The player has a chance of obtaining either nothing, a life preserver or an empty bottle. The result is randomly chosen when a new file is started. After choosing one of the three, Jack or Amy - depending on who the player is playing as - escapes the ship and falls into the ocean.

After the player character regains conciousness, they are free to move along the beach. After walking a short distance, the player character discovers the partner character. After walking off the beach close to the river, Jack sees a mushroom and runs up to it. He plans to eat it raw, Amy tries to convince him that eating it raw is a bad idea and that he would get a nasty stomach ache. But Jack is hungry and he gobbles it down, despite Amy's warning. Amy is worried, but Jack tries to convince her that he saw the same mushroom in his mountain climbing club handbook and that it's okay. After a while, Jack starts to feel horrible. Amy believes it's the mushroom, and she is upset Jack didn't listen to her. Jack apologizes, saying he "could've sworn that mushroom was edible." After finding a cave and making a fire starter to start a fire, the two introduce themselves and both discover that they are the same age and they were on their class trips. Amy tells Jack that she is a member of the Archery club, seems very convenient doesn't it?

After eating, the two decide to go to sleep so they can have energy to explore tomorrow.

After another day of exploring the island and moving a gigantic rock out of a pathway. Jack and Amy decide to head back and rest. The next day, if the player choses as Jack, Amy is sad and leaves the cave crying because she broke her necklace. Jack makes her a new one and she is happy again. If the player chooses Amy, the two get in an arguement and Jack gets angry and runs out. Amy makes a good luck charm out of shells she finds on the beach, and when she returns to the cave. Jack is back and okay. She apologizes for what she said and tells him she was worried about him. Jack apologize as well and tells her he did not mean to worry her and that he would always be there for her whenever she's down. She gives him the good luck charm and both are happy.﻿ 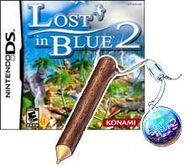 Add a photo to this gallery
Retrieved from "https://lib.fandom.com/wiki/Lost_in_Blue_2?oldid=6759"
Community content is available under CC-BY-SA unless otherwise noted.