Lost in Blue 3 is a survival game developed by Matrix Software and published by Konami for Nintendo DS in 2008. It is the sequel to Lost in Blue 2.

It features four teenagers washed up on Little Xanadu Island. It is the only game in the Lost in Blue series so far to allow the player to control four characters. Lost in Blue 3 has an official soundtrack available on iTunes, Amazon, and Google Play Music composed by Stephen Geering.

Sometime in approximately the 1400s, a ship called The Grey Prince hit some rocks on the outskirts of the island near the northern quarry beach and became stuck. It is still able to be explored by the time the teenagers arrive. It contains a sea map revealing the island's name, copper wires, and plugs.

Approximately a decade before the player and their companions washed up on the island, a group of scientists built an underground facility in order to research a drug that "boosted abilities and allowed organisms to survive in any environment". They first experimented on animals and later, humans. According to Kumiko, their goal was to create humans with enhanced physical powers. Kumiko's father's diary reveals that although the drug did enhance physical abilities, it also spawned a virus with terrible side effects. The scientists working on the drug realized this and attempted to find a counter to it before it caused any harm. However, a massive earthquake damaged the island severely and halted all efforts to cure the drug. Sam and Eric, who were living on the island at the time, were evacuated to the mainland. The government attempted to cover up the existence of the island, concerned about the ramifications if it ever got out to the public. Sam was the only human tested on, but he was not harmed.

Sometime before the game started, Sam began dating a girl Claire, who he taught a song his mother used to sing to him. However, around this time, the side effects of the drug began kicking in. Now, anyone around him would experience severe harm over an indeterminate amount of time. Sam did not want to hurt his girlfriend, so he completely dropped all contact and disappeared. Claire feared something may have happened, as his house was wrecked before he left. Sam, Eric, Claire, and James all boarded a cruise ship for varying reasons. For an unknown reason, Sam encountered several men in dark suits on the ship who attempted to attack him. After being badly harmed, the men declared "If we're going down, we're taking the ship with us!" to which they destroyed the entire ship. James and Eric both witnessed the sight, and the four of them later washed up on the island at different places. Eric suffered from amnesia, however, after Claire found him, she mistook him for his twin brother, Sam, and so began the events of Lost in Blue 3.

After exploring the jungle-like area of the island and helping Claire overcome her fear of water, the pair build a bridge out of a fallen log and cross over to the other side of the jungle. They soon find themselves in the Quarry where they meet another survivor: a young man named James.

Although James has no problem with Claire, he deeply distrusts Eric, claiming that he witnessed him confront some men who were attacking a lab back on the ship, mistaking him for his twin brother, Sam, once again. When Eric came out, the men doubled over in pain as if he had some sort of evil influence over them. The men declared that if they went down, so would the ship. Claire defends Eroc, causing James to think maybe he isn't so dangerous if he has been with a clearly-unharmed Claire all this time. Still slightly suspicious, James agrees to join their group and helps to survive and explore the island...

As Eric and James explore a swampy area, they come across an alligator. James attempts to drive it away but is thrown back, compelling Eric to defend the stunned James from the alligator until the dangerous creature gives up and goes away. Although the experience was frightening, it also forges a friendship between the two boys. When they find a wide river, they work together to build a raft and sail to a new area.

Fighting their way through a cave of bats, they find themselves in a grassy valley containing a large lake and a derelict entrance to an abandoned laboratory complex. The supposed 'Sam' has a flashback revealing that he is actually Eric, Sam's twin brother. He and his brother lived with their scientist parents on the island before it was destroyed in a massive earthquake. The group spends the night in a room already furnished with beds, a shelving unit, and a sinkable to store water.

Exploring further, the trio discovers a field where they witness a plane crash. Rushing to the broken aircraft, they discover a young girl named Kumiko, who appears to have flown the plane herself. Though alive, she is injured, and the group needs to bring her mugwort to heal her. Once revived, she agrees to join their team. Once the memo near her plane is found, Kumiko is asked to tell the others the island's secrets. Over a period of three days, she explains that the scientists at the facility, including her father, were trying to develop a "miracle drug" that would be able to enhance the human race's abilities to survive in any environment. When they find her father's diary, however, it reveals that while the drug did enhance the human subjects' abilities, it also spawned a virus that would over a period of time greatly harm anyone who came near the subject.

Using the passcode written in the diary, they unlock the submarine room and reveal its hidden occupant: Sam. Overjoyed and shocked to find her long-lost boyfriend alive, Claire tries to open the door where he's shut himself away but he stops her. He explains that he was indeed a test subject of the drug the facility was developing and consequently is infected with the virus. He asks her and the others to finish the cure that his mother was working on.

After assembling all the ingredients and giving the completed medicine to Sam, everyone finally escapes the island on the submarine.

Eric: A young man who was a passenger on the same cruise liner Claire performs on. He suffers amnesia after the cruise ship crashes.

"Age: 17. Birthday: Feb. 2nd. Blood Type A, Aquarius. Tries to take things seriously and act like an adult. He has strong emotions, but doesn't show them." -Scrapbook

Claire: A young singer who was hired to provide musical entertainment on a luxury cruise liner.

"Age: 17. Birthday: June 16th. Bloody Type B, Gemini. A bit of a dreamer, her head is always in the clouds, which can lead her into trouble at times. Cheerful and very open with people." -Scrapbook

James: A boy skilled in martial arts who survived the ship's sinking. He is deeply distrustful of Eric at first.

"Age: 15. Birthday: Oct. 20th. Blood Type O, Libra. Will quickly take on any challenge without thinking. Overly confident, but still has a strong sense of right and wrong." -Scrapbook

Kumiko: An exceptionally smart thirteen-year-old girl who flies a plane to Little Xanadu Island entirely on her own, managing to survive its crash-landing.

"Age: 13. Birthday: Mar. 9th. Blood Type AB, Pisces. A calm thinker who's very smart. She acts politely, but is still nervous around others. Sticks with things until she finishes them." -Scrapbook

"Age: 17. Birthday: Feb. 2nd. Blood Type A, Aquarius. No matter the situation, always acts first, only thinking when the going gets tough. Even in the worst times, never gives up." -Scrapbook

The Dinghy ending must be done between 10 am and 3 pm, or else a unique ending will play where Eric is not rescued.

The 365 day ending is made easier by staying in the treehouse.

The Radio ending is likely one of the trickiest endings; as Sam or Kumiko, you must fish up the broken radio from the aboveground lake. You must stand on the center island and face upwards while fishing. If you are playing as Claire or James, you can get the broken radio by sending Sam or Kumiko out to gather food. The broken radio will have a frequency entered in already that can be viewed in the album. You must travel to the northern part of the Cape Area, dial in the frequency, and wait. The boat will arrive a week after you contact them. They arrive slightly faster if you tell them there is a bamboo grove on the island. 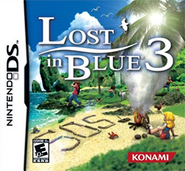 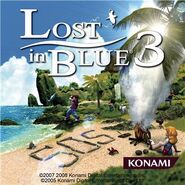 Add a photo to this gallery
Retrieved from "https://lib.fandom.com/wiki/Lost_in_Blue_3?oldid=5489"
Community content is available under CC-BY-SA unless otherwise noted.